[0065]   The present invention consists of a plurality of workpiece support assemblies which are mounted to a common table structure. Each workpiece support assembly carries a fixture element, together with a means to provide vacuum to hold the workpiece against the fixture element. Each fixture element can be adjusted with up to six degrees of kinematic freedom, and then immobilized rigidly in the desired position with extreme precision. At the heart of the invention are a combination of joints, slides and pivots, which, working in concert, provide an unprecedented freedom of movement, while retaining the capability for the workpiece engaging surface to be immobilized securely in a practically unlimited number of positions. 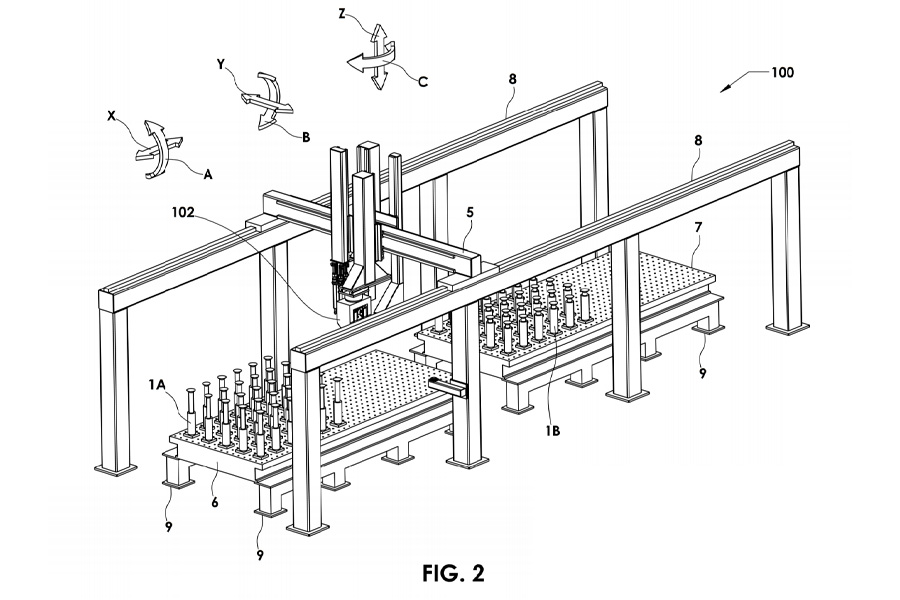 VIEW THE COMPLETE APPLICATION
[0066] Prior tooling systems of the types disclosed in US patents No. 4,684,113 and No. 5,722,646 are commonly used in the aerospace industry. The workpiece support assemblies in these systems are typically limited to three degrees of kinematic freedom, comprised of the vertical axis, commonly referred to as the Z axis, for the first degree of freedom, and the fixture element which rotates on a ball joint resulting in two additional degrees of kinematic freedom referred to as the AB axes.
[0067]   The present invention has utility because of its unique combination of simplicity, flexibility, lockability, and automatability. The absence of any one of these characteristics greatly reduces the utility of the invention. Regarding simplicity, complicated systems are inherently less reliable and more costly than simple systems, and if the operating environment is wet the probability of failure is further increased. Regarding flexibility, known flexible tooling systems for contoured workpieces commonly provide three degrees of adjustability, compared to the present invention which provides six degrees of kinematic freedom.
[0068] Regarding lockability, the positions and accuracies of known systems with hundreds of workpiece support assemblies that cannot be fully immobilized are practically impossible to verify, which can result in workpieces worth hundreds of thousands of dollars being improperly machined.
[0069] Regarding automatability, an adjustable extension attachment is disclosed in US patent No. 5,722,646 with regard to FIGS. 14 and 15 which adds two degrees of adjustability in the XY axes. However, the limitation of this method is that the adjustment has to be performed manually. Manual adjustment has significant disadvantages in a production manufacturing environment, including the amount of time required to manually adjust each attachment, the difficulties of access that occurs when installing attachments in the middle of a large group of workpiece support.

Challenges to Flexible Tooling Operations & How to Overcome Them